Noble Fir and the Return of the Light

White puffs of breath hang in the cold air. Snow dusts our heads and shoulders as we brush back the limbs of conifers that crowd the trail. David and I hike the Larch Mountain Trail near the Columbia River, east of Portland. We’re not going far on this wintry day, hoping only to catch a glimpse of noble fir, Abies procera, in its native habitat.

As we near the holiday season, we’re seeking a “wild Christmas tree.” David decided we should look for the “perfect” wild Christmas tree, the noble fir. “The most elegant of Christmas trees,” he says. “It holds its branches symmetrically, the boughs sturdy and level.” He extends his arms straight out, away from his body.

“It twists its needles upward, exposing the lower surface of the stem. A perfect place to hang ornaments. The needles have a bluish cast and the tree does not shed them as they dry. Yep, just about perfect.” He continues with long strides up the path.

Larch Mountain, where noble fir is abundant, is the best location for our wild tree safari. We might even find a 200 foot specimen of this peerless winter holiday tree. Despite the mountain’s misleading name, it harbors no larch. Both mountain and trail get their names from timber men who harvested and sold the noble fir as larch. No one would buy fir in those days.

David leads the way to the right micro-climate: mid-elevation, a moist habitat, and rich deep soil.
“Here’s one,” I cry out in order to get his attention. 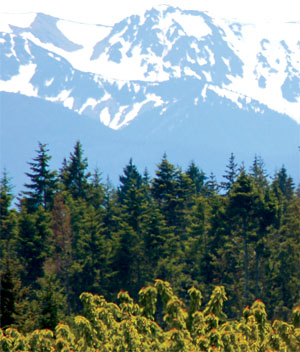 “Why?” I find these details endlessly fascinating.

“An adaptation to garner more light. So, it makes more food, can out-compete its neighbors,” David says. “Also, look at the bud at the tip of the branch. It’s pointed. On true firs the bud is round.”

“Well, this tree is pretty too.” I head up the trail.
“Sure it is. And, at least, you recognized the differences among firs, pines and spruce.” David catches up, then retakes the lead.
Earlier he explained distinctions in the world of conifers. Pine needles occur in bundles of two, three, or five. Fir needles are solitary and spruce needles bite. In other words, they’re sharp and, well . . . needle-like. But that tidbit of information is irrelevant; there is no spruce up here.

“Whose idea was this?” I grumble, rubbing my hands together. I’m not used to this weather despite living in the Pacific Northwest for some years.

I laugh along with him. But I am thinking about the idea of bringing trees into the house in mid-winter. I mean, whose idea was this? I know the Egyptians were the first. They brought date palm fronds inside during winter solstice celebrations. But does that count?

All the mid-winter festivals celebrate the shortest day of the year in some way. It marks the return of the light. The point when the sun begins to climb back up, higher in the sky, bringing longer days. That’s the moment when you know that the long dark months are over. It’s the return of hope.

Still, who started the tradition of bringing an evergreen tree into the house? I know the earliest written record comes from Alsace. A forest ordinance of 1561 reads, ‘No burgher shall have for Christmas more than one bush of no more than eight shoe lengths’. That sounds like the first environmental regulation to me.

A Hessian mercenary soldier fighting with the British probably put up the first Christmas tree in North America in 1777. Yet the tradition of having a decorated tree inside most certainly came to this country with German immigrants. Matthew Zahn of Lancaster, Pennsylvania wrote about his family’s excursion to cut a Christmas tree on December 20, 1821. The tree was decorated with nuts, dried fruits, and seeds.

The English colonists actually outlawed Christmas trees. The idea really wasn’t acceptable until Queen Victoria and Prince Albert popularized it in the 1840s. In fact, Massachusetts banned their use until 1857.

In my musing I have lost sight of David, but soon hear his whistle and I hurry to catch up. Two more bends in the trail and I find him examining the silvery-blue foliage of a young noble fir.

“See the hockey sticks?” David holds a bough in a gloved hand. He hands it to me. “Feel the weight of it. Smell it.”

“It’s heavy.” I hold it to my nose and take a long, deep breath. “It smells like the deep forest.”