The Holly and the Ivy . . .and Mistletoe too.

‘Tis the time of year when I find myself standing under a sprig of mistletoe expecting to be kissed! We’re putting branches of bright green holly with brilliant red berries in bouquets and wreaths to decorate the house for the holidays. And I see out the window, in the snow, that the ivy is in full bloom. What a crazy plant, to burst into bloom in winter.

The ivy featured in the carols and cultural traditions of Great Britain and Northern Europe is the English ivy, Hedera helix. It is in full bloom at the moment, covering itself with silver dollar sized umbels of small, inconspicuous flowers. No wonder the ancients regarded this plant with awe – it flowers in winter. Today, in the Pacific Northwest, we also regard it with awe, as a noxious weed! Each small flower will mature into a pea-sized, black-purple berry in spring. Birds love these berries and spread the seeds of this plant far and wide. The seeds survive passage through the gut of a bird to be pooped out in a new location. 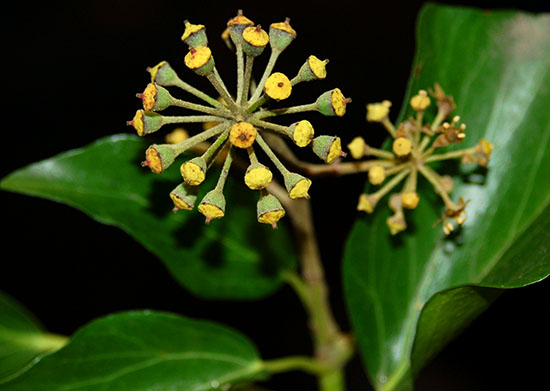 English ivy’s long juvenile period lasts ten to thirty years. The juvenile plants are the familiar ornamental vines with the palmately-lobed leaves available in numerous named cultivars. Eventually the plant becomes sexually mature. It flowers, makes seeds, and changes its growth habit. Its a vine with long flexible stems as a juvenile, but a shrub with short, stiff stems at maturity.

The bright green leaves and brilliant red berries of English holly are widely used for decoration during the winter holiday season.

The holly featured in Christmas carols is the English holly, Ilex aquifolium. The stiff leaves of this plant are heavily armed with spines around the edges. The bright green leaves contrast nicely with the bright red berries on the female plants. Male plants, of course, have no berries. This plant, like the English ivy, is another invasive species in the Pacific Northwest. Birds eat the berries and spread the seeds.

The holiday mistletoe of legend, Viscum album, unlike the previous two plants, is a parasite. It comes from Northern Europe and Great Britain where it grows on tree branches and sends its specialized roots (haustoria) down into the tissues of its host to steal water, food, and mineral nutrients (much like a tapeworm in animals). Female mistletoes bear berries, which are white, and the seeds are spread by birds. Mistletoe has green leaves and is able to manufacture some of its food by photosynthesis, but it has to get all of its water and mineral nutrients from its host. Tradition dictates that you will get kissed if you stand under mistletoe so hang it above doorways or other places people use frequently.

In the USA, the holiday mistletoe from Europe has escaped into the wild in California. California also has native species of mistletoe in a completely different genus (Phoradendron). These parasites are easily spotted in winter when they show up as leafy green balls on the leafless branches of their host trees. Healthy trees can stand a few of these parasites, but a large number of them can kill your tree. The best way to deal with them is to prune them away by cutting off the infected branches. 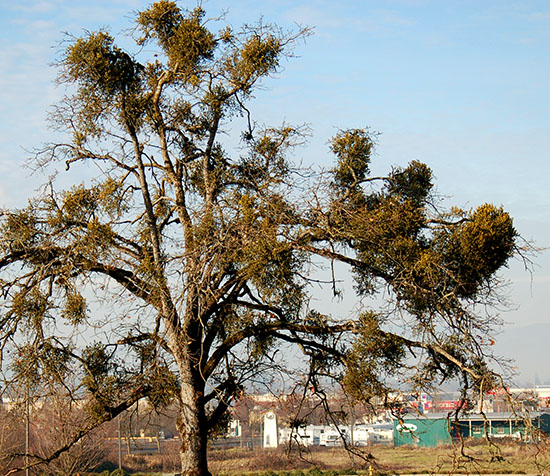 Today is December 21, the Winter Solstice. Tonight is the longest night of the year in the northern hemisphere. This is the turning point, the time when the solar cycle begins to turn toward the light and the days begin to get longer. Solstice is, of course, cause for celebration, and many cultural traditions call for mistletoe over doorways, and holly and ivy around the fireplace.

In ancient times it was extremely important to know when the winter solstice, the moment of the sun’s rebirth, would occur. Communities needed to ration their food supplies in order to survive the famine months of winter. Stonehenge, for example, is a giant calendar that specifically marks the winter and summer solstices. Built nearly five thousand years ago as an astronomical observatory, it stands today as testament to its usefulness to the people who built it.

To the ancients, plants that kept their green leaves through the harshest winter storms, the holly, ivy, and mistletoe, must have seemed mysterious and magical. These plants were often considered sacred. People cut sprigs, bring them into their homes, and have done so for thousands of years. We do so to celebrate midwinter festivals, traditions to continue various pagan and Christian festivities. At our house, Kathryn and I bring the holly and the ivy into our home . . . and mistletoe too. We love to celebrate the turning of the wheel, the eternal cycles of nature. And we like kissing too!