When I was a kid my mother grew an enormous poinsettia (Euphorbia pulcherrima) in a dormer window in my bedroom. She had received it one Christmas as a small potted plant to decorate the dinner table. We always gathered as a very large extended “family” that included close friends of my parents and their children. My siblings and I are still friends with the children of these families and consider them hanai brothers and sisters. Hanai is a Hawaiian word that loosely equates to “adopted”. Holiday gatherings of our hanai family brought many celebratory traditions together: Jewish, Egyptian, German, and Celtic. I’m not sure who brought the little poinsettia as a gift, because all those cultures embrace the practice of bringing greenery and plants into our homes in winter, especially during the winter feasts.
Most of the time, the plant lived in a giant yellow pot in the bay window of my bedroom. There, it soaked up plenty of sunlight, just enough water, and not too many nutrients. To tell the truth, I never really paid attention to how my mother cared for it. But she must have babied that plant, because by the time I was a teenager, the poinsettia was lush, robust, and six feet tall.
Every autumn my mother came to my bedroom each evening and dragged that heavy pot and plant into my closet. Shoving the shrub among my clothes, she’d pull on the sting to turn out the light, shut the closet door, and forbid me to open it until morning. And by Christmas every year bright red “flowers” festooned the branches. I didn’t know then what I know now – that these are not really flowers, but modified leaves that change colors through the lengthening dark nights of early winter. Before the solstice and the return of the light. 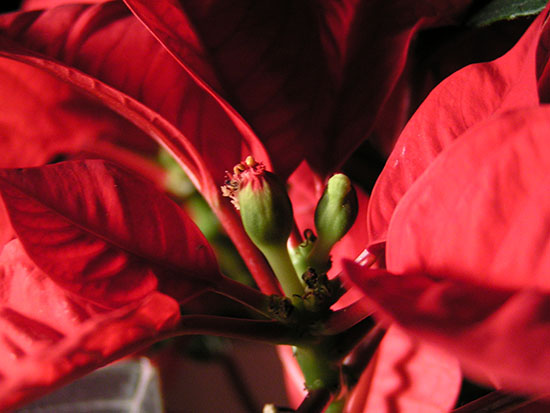 The English common name comes from Joel Roberts Poinsett, who introduced the plant to the U.S. in 1825, when he served as the first U.S. Minister to Mexico. Poinsettias are large shrubs or small trees and are native to dry topical forests in Mexico, but now grow wild nearly everywhere in the tropics. Indigenous peoples have used their bracts to make red dye and their milky sap for medicine to reduce fevers.
I vividly recall the day I first saw a poinsettia in the wild. I was nineteen and had traveled to Belize and Guatemala with two college chums. We hitch-hiked from Belize City to Tikal and Guatemala City; we cadged a ride on a sail boat to the barrier islands off the coast; and we traipsed through the forest in search of adventure.
One night we camped in a clearing at the foot of one of the excavated pyramids at Tikal. In utter darkness, surrounded by the shuffling, calling, scurrying sounds of nocturnal animals, we threw our sleeping bags on the ground and slept the sleep of complete ignorance. The kind of ignorance that brings forth the guardian angels. Next morning we rose early and encouraged each other to climb to the top of the tallest pyramid. The real reason we were up at dawn is because the ants had emerged from their burrows and swarmed over us. They had a wicked bite.
We headed down the jungle trail, quickly leaving the clearing behind. In just a few feet we crossed paths with a long line of harvester ants – ones that cut leaves into little pieces and transport them over well-worn trails to feed their cultivated mushrooms. None of us knew much ecology then, so after watching them for a bit,  we dubbed them umbrella ants, and set off on our way again.
A troop of howler monkeys soon spotted us, and remaining at a safe distance, paralleled our track. Hooting and howling, they taunted us with their calls. One, who seemed to be an adolescent like us, swung aggressively close overhead, and tried to nail us with a torrent of his urine. That will teach us to trespass in his territory. Luckily he missed. 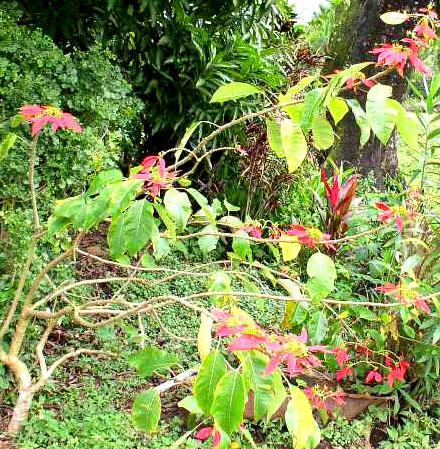 A wild poinsettia in Belize.

Just as we reached the base of the towering monument, I spotted a vaguely familiar shrub – leggy, and scraggly, yet similar to my old room-mate. A few reddish-pink bracts adorned its branches. I was completely taken aback. It was like running into an old acquaintance from elementary school – you know you know them, but haven’t been in touch for a long time. Suddenly I saw, really saw the plants of the jungle around me. Wasn’t that vine climbing up the trunk of that big tree just like the plant in my mother’s sun room? And what about the tree itself – wasn’t it a huge specimen of the small potted “fig” tree my mom had?
This was my first conscious encounter with a wild houseplant. Oh, to be nineteen again. To discover the world as if you are the first person to ever see such sights.
On December 11, 2009   /   Growing Together   /   Leave a comment