This week Kathryn and I are teaching Entomology, the study of Insects, to the Master Gardeners. Insects are absolutely fascinating animals, some are the gardener’s friend and some are foes. How can you tell which is which? Use this handy guide to help you distinguish between pests and beneficial insects on your plants.

Beetles, Weevils, and Curculios. All members of this group belong to the order Coleoptera, meaning sheath (coleo) wing (ptera). In this group, the wing covers (the two fore wings) are hard, often shiny and colorful, and completely cover the abdomen. These insects have complete metamorphosis. The ladybird beetle (aka, lady bug) is a familiar representative of this group and one of the most beneficial insects in your garden. Many destructive pests are found in this group, in addition to the beneficial ones. As a group they are rather clumsy fliers compared to many other insects. They have mouthparts adapted for chewing.

Beetle eggs hatch into larvae that are distinctly different in appearance from the adult insect. Some are C-shaped, white grubs with brown heads and three pairs of jointed legs. They live in the soil and feed on plant roots. Others, like the ladybird beetle larvae, look like tiny monsters crawling over the leaves of your plants searching for aphids to eat.

An adult Japanese beetle illustrates the main features for identifying beetles in general. Notice that the head is blunt and rounded, not elongated into a snout and that the wing covers shield the whole abdomen.

Curculios and weevils are closely related to beetles, but their eggs hatch into larvae that lack the three pairs of jointed legs. Many are C-shaped, white grubs with brown heads, like beetle larvae, but the absence of jointed legs is their  distinguishing feature.

Adult curculios and weevils have a distinctive long snout, a feature that beetles lack, making them fairly easy to identify.

Flies. Flies are members of the order Diptera, meaning they only have two wings instead of four. This group includes many beneficial insects such as syrphid or hover flies, and tachinid flies, both of which are predators of destructive insect pests. Destructive flies include a host of different fruit flies from med flies to apple maggots. Nuisance pests in this order include mosquitoes. Members of this order have complete metamorphosis. Flies are extremely adept at aerial navigation. Hover flies, for example, are as adept as hummingbirds in their aerial maneuvers. Fly mouthparts are adapted for sucking up food. They cannot chew.

The larval form in this order is a maggot, a worm-like animal with no obvious head and no legs. Maggots are often whitish or yellowish, small, and slimy. 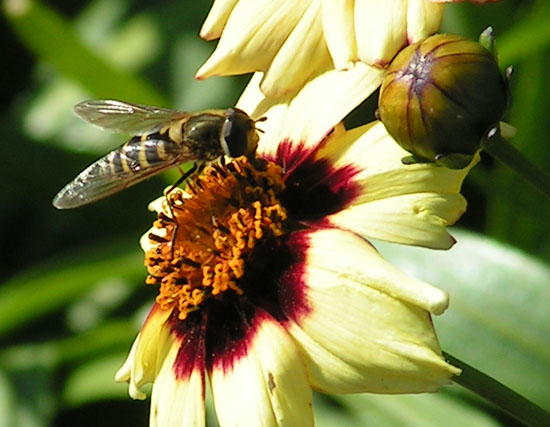 An adult fly’s wings are often held out at an angle, away from the body, as opposed to lying flat along the back of the insect. The position of the wings frequently serves for rapid identification of this group.

True Bugs. The true bugs are all members of the order Hemiptera, meaning half wing. All insects and many other small animals are often called “bugs” colloquially, but genuine bugs are found only in this order. The fore-wings of true bugs are hard and sometimes colorful, as in the beetles, but they only partially cover the abdomen. Destructive bugs include squash bugs, stink bugs, tarnished plant bugs, and others. Beneficial bugs include assassin bugs, big-eyed bugs, and minute pirate bugs. Nuisance bugs include bed bugs. Members of this order have incomplete metamorphosis. The larvae are nymphs which resemble miniature adults without wings. All members of this order have piercing/sucking mouthparts.

Squash-bug nymphs somewhat resemble the adults and are often found in mixed populations feeding with adults. Nymphs and adults stick their needle-like beaks into plant cells and suck out the contents.

Squash bug adults are wary and are excellent fliers.

Bees, Wasps, and Ants. All of these insects belong to the order Hymenoptera, meaning membrane wing. They have four membranous, transparent, and durable wings. They are excellent fliers. Ants develop wings only briefly, and just in the young queens and males, preparaing for their mating flight. Adult bees and wasps have permanent wings. Destructive insects in this order include sawflies and carpenter ants. The order also includes several species of ants that are “dairy farmers,” who cultivate and care for their “cows” (aphids, scale, mealybugs) to milk them for honeydew.

Beneficial hymenopterans include honeybees, of course, and many minute wasps which are parasitoids of destructive insects like caterpillars. Many larger wasps feed on caterpillars or spiders. Nuisance insects in this group include yellowjackets and wasps that are attracted to sweet fruit. All hymenopterans have complete metamorphosis. Hymenopteran larvae resemble maggots except that they have an obvious head. For many bees and wasps, the larvae live in individual cells constructed of wax, paper, mud, or wood. They pupate inside the cell and emerge only as adults. Adults have mouthparts enabling them to both chew and to suck up liquids. Many members of this group protect themselves by stinging when threatened. Many are also social insects which live in large colonies founded by a fertile queen.

Adult yellowjackets are frequent nuisances at picnics and around fruit trees when the fruit is ripe. They eat fruit which has been pecked open by birds, but generally cannot break open fruit on their own. They are not destructive to your plants, but they are aggressive and their sting is severe.