Our fingers are stiff with cold. It is winter here in the Northwest. David picks up his end of the measuring tape, and a hundred feet away, I pick up mine. We walk ten feet downslope and lay the tape on the ground again. Steamy clouds of our breath hang in the air. Dry leaves and twigs crunch underfoot. David turns on his recorder and walks across the slope toward me. He records the name and size of every plant the tape touches.

“How’s it look?” the landowner asks. She stands beside me and is concerned. A year ago, the bluff on which her home sits started sliding toward the beach. Saturated by heavy winter rains the glacial till became unstable and slumped. Afraid her house might fall into Hood Canal she called on us to help her manage runoff, re-establish appropriate native vegetation and stabilize the slope. Today, we conduct line-intercept transects along permanent monitoring points to see if any movement has occurred in the last year. If the land is moving, then the plants will have shifted position.

“So far, so good,” David responds. “Nothing has moved.”

The woman smiles in relief.

David slowly rewinds the meter tape onto the yellow spool. “The beach strawberry is doing a great job of stabilizing the slope. The mix of other perennials and shrubs we selected are providing good cover.” He bends over to examine the small plants at his feet. “And I see a dozen new starts of your alumroot. Looks like volunteer seedlings.” 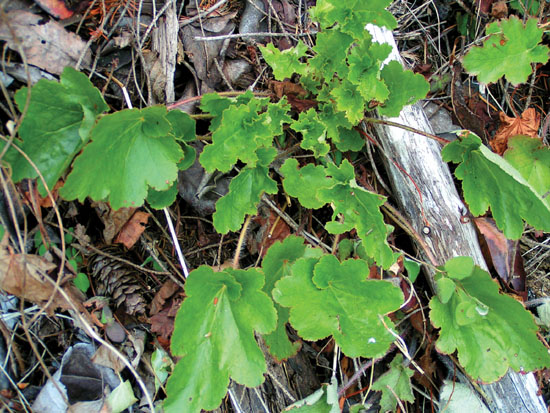 The small-flowered alumroot, Heuchera micrantha, is native to the Olympic Peninsula. It is an evergreen, low maintenance perennial that is a valuable parent of numerous superstar hybrids.

A colony of our native small-flowered alumroot, Heuchera micrantha, occupied the slope prior to its collapse. Now the new seedlings’ bright green leaves spread across the brown leaf litter on the ground.

“Great. I love them.” The woman stamps her feet and flaps her arms to get her blood moving. But she grins with pleasure and relief at David’s news and at the appearance of a favorite plant.

The tail end of the tape-measure slips home. “All done. I still have to transcribe the data but it’s clear that this slope is no longer moving. Your new French drains collect and redistribute the up-slope runoff. And the new plants control the erosion.”

We walk back to her house through the garden. As part of her effort to control the erosion that threatened her home, she has removed the lawn, put in berms, and planted low maintenance perennials and shrubs that she doesn’t have to water. Closer to the house, she has placed plants that need slightly more water. She stops and points to her Heuchera hybrids. “Look at them. Mid-winter and colorful as ever.”

“Isn’t this one ‘Amber Waves’?” David touches the golden leaves of one variety. “Did you know that one of its parents is the native species growing on your bluff?” He points to another with nearly black foliage and another with brilliant chartreuse leaves. “This must be ‘Obsidian’, and this one, ‘Key Lime Pie.” 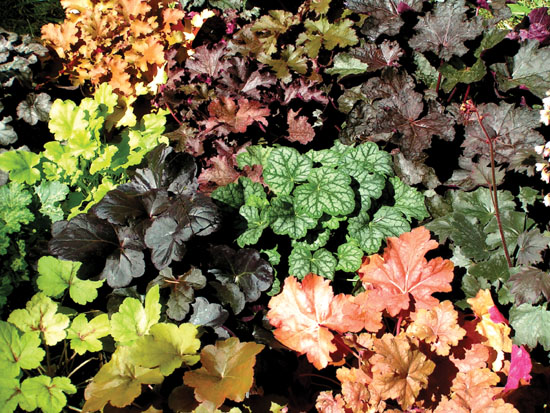 Modern Heuchera hybrids are available in a wide range of colorful foliage which they retain all year long.

She nods, delighted to talk plant with another aficionado. “I love all the color you get from these, all year long, and they’re totally trouble free.”

Many Heuchera hybrids have achieved celebrity status in recent years and have become glamorous stars of the perennial garden. Like Academy Award winning actors, these new hybrids appear on television, in magazines, and win “Oscars” in perennial trials across the country.

Our native Heuchera micrantha is a humble denizen of the floor of the emerald forest on the Olympic peninsula. Like any parent of a child star, our native alumroot stays in the background, allowing her celebrity children to take the spotlight. 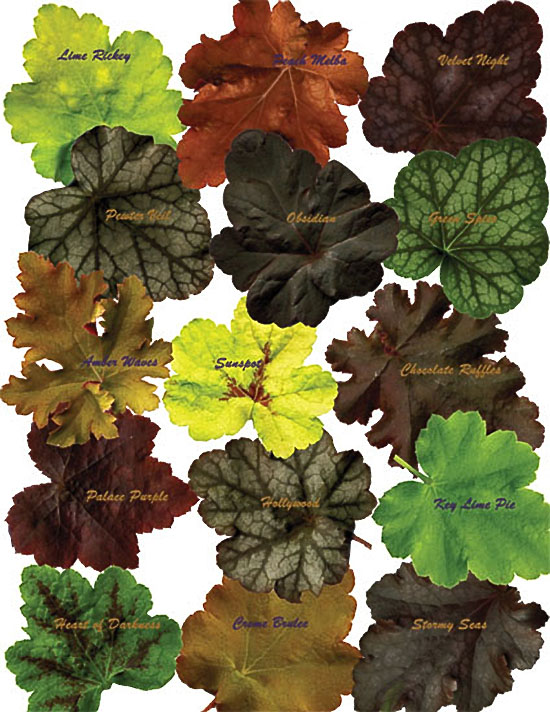 The wide range of colors and patterns in the foliage of heucheras has resulted in numerous new hybrids which are valuable additions to the perennial garden. Many are descended from the Northwest native, H. micrantha. This illustration includes ‘Sunspot’ and ‘Heart of Darkness’, both of which are intergeneric hybrids between Heuchera and Tiarella, and are called x Heucherella.

The common name, alumroot, suggests medical uses, and Native Americans pounded the dried roots to make a poultice to stop bleeding and promote healing of cuts and sores. This medicinal usage followed the plants from America to Europe where Linnaeus gave the name Heuchera to the genus in order to honor Johann Heinrich von Heucher, Professor of Medicine at Wittenberg (1677-1747).  Modern pharmacopeias included Heuchera in their texts well into the twentieth century.

The second part of the name (the specific epithet), micrantha, means small-flowered, and gives rise to her common name, the small-flowered alumroot. While individual flowers are small, white, and not very showy, they are borne in great numbers on long, one-and-a-half-foot tall many flowered stalks.

David Douglas (1798 – 1834) named Heuchera micrantha based on his collection of the plants from the Columbia gorge in 1823. Haenke, the botanist on the Malaspina expedition from Spain collected specimens of this species on Vancouver Island in 1791. However, Douglas published first, so the plant gets Douglas’s scientific name, despite the fact that Haenke was the first European botanist to collect it.

All fifty-five species of alumroots are members of the Saxifrage family and all are native to North America. H. americana, whose native range is from New England to the Midwest states, traveled first to Europe and is another important parent of modern hybrids. A third  parent, H. villosa, comes from Virginia, Georgia and Tennessee. All three of these species, H. micrantha, H. americana, and H. villosa, figure prominently in the genetic background of all the modern Heuchera hybrids.

The bright red flowers of another species, H. sanguinea, attract both hummingbirds and humans. Coral Bells, as it is commonly known, comes from New Mexico, Arizona and Mexico. It contributes genes for larger, brightly colored coral-red flowers to numerous hybrids in the genus. 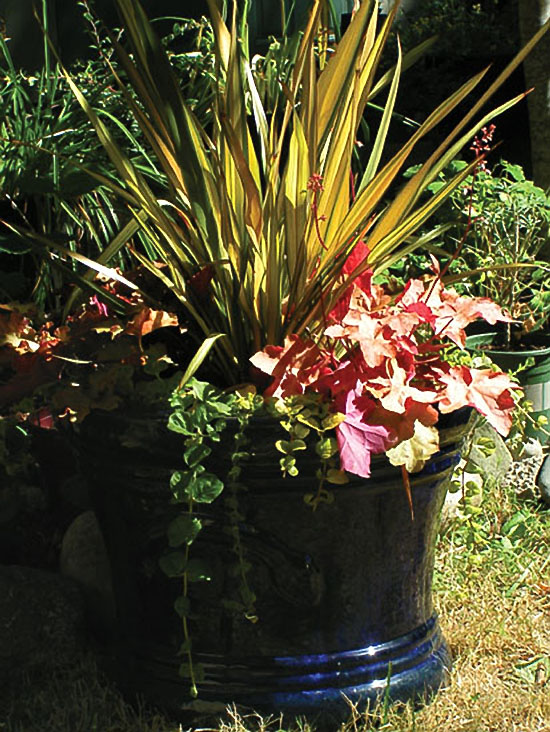 This large cobalt blue planter contains Heuchera ‘Peach Melba’, Phormium ‘Yellow Wave’ and golden creeping Jenny. All of these plants retain their colorful foliage through the winter and all do well in partial shade. Many heucheras are widely used in container gardening.

We gratefully enter the warmth of the home-owner’s country kitchen. Sipping chai spice tea beside the fire, David relishes more conversation about plants. Whenever genuine garden devotees gather they seem to spout lists of names. Scientific names, cultivar names, obscure botanists from the past. Their pleasure brings me a smile as I leaf through plant catalogues, winter inspiration to the avid gardener.

Beyond the window snow flurries swirl. My companions are lost in their discourse. Outside, a cobalt blue pot, stuffed with the many-colored Heuchera, sits on the patio. The glowing leaves, ignoring the cold, provide all the colorful inspiration we need.