Today we pay tribute to David’s father, Lawrence Edwin Deardorff, who passed away on May 11 at the age of 97. Larry first took David into the garden when he was 6 years old, and he learned about the world of plants at his father’s side. Larry was an avid gardener his entire life, and became our partner when David and I owned Island Biotropix, an orchid nursery and tissue culture lab in Hawaii. Thank you, Dad. We will miss you terribly.

David wrote this memory of his Dad last year and we’d like to share it with you today: 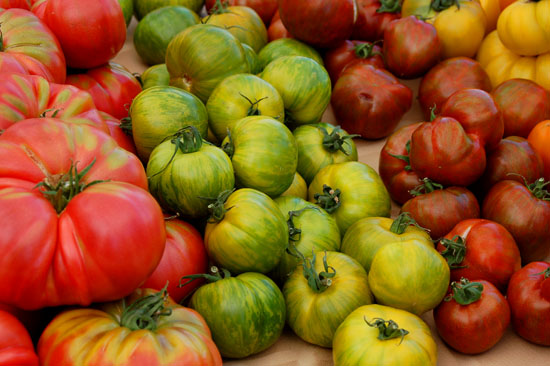 My father’s huge hands scooped a small hole in the rich garden soil and placed a tomato seedling in it. He mopped his brow, sweating in the humid afternoon of an Ohio spring. As instructed, I knelt beside him, scraped soil around the root ball with my small eight year old hands, and pressed it down. My first lesson in how to be a good provider. A man’s job.  Our backyard vegetable garden became an important source of food for a big family with a meager income.

Dad hammered a wooden stake into the ground beside the plant, showing me how to place the stake to avoid damaging the roots. More interested in completing my bug collection than in embracing the moment, my mind wandered and precious moments with my father melted away like winter snow.

I loosely tied three or four strips of an old sheet to each stake, optimistically anticipating the eventual height of the tomato plants. As spring passed into summer the tomato patch became a jungle and helping Dad tie each plant to its stake as the plant grew taller was my responsibility. 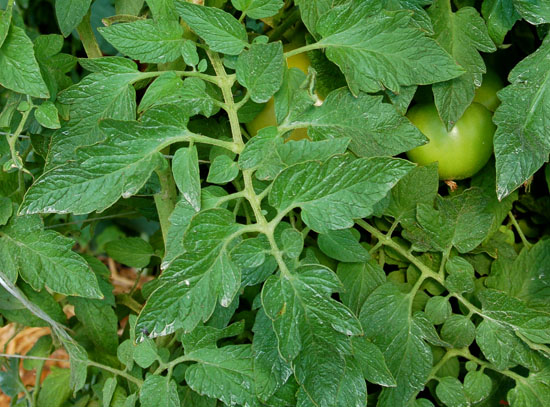 On a hot summer afternoon when Dad was at work, I walked into the garden alone. “Keep Out” he had decreed. Ah, but he was not home and I was a bad boy.

The evocative aroma of the tomato plants enveloped me as I brushed past their leaves. Taller than me, the exuberant vines hid me as I hunted for bugs. Large green fruit hung down in clusters on all sides. A solitary fire-engine red tomato, like a buoy in that sea of green, called out to me. Furtively, I snatched it from the vine. 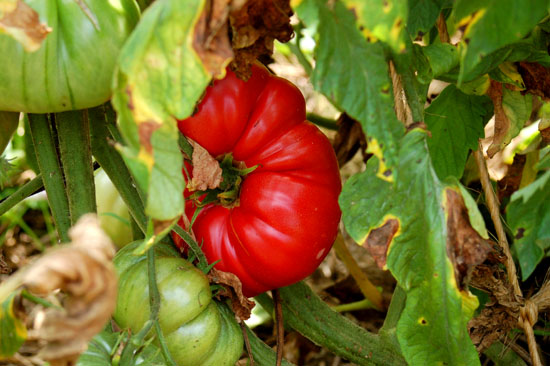 The fruit radiated heat from the sun into my hands.  I took a bite. The flavor exploded in my mouth. Incredibly complex acidity, sweetness, and aroma. It was magnificent, and so vivid it is burned into my memory banks. I have never forgotten the taste of that forbidden fruit.

When Dad came home he went directly to the garden. I’m sure he’d been dreaming about that ripe tomato, the first of the season, all day long. He must have stared in disbelief at the empty space where it had been. I can imagine the storm clouds gathering in his face and almost hear thunderous bellowing that came after. But I wasn’t there to see. Long gone, I played at a neighbor’s house, and missed the outburst.

Later that evening, at supper, Dad brooded, certain that one of us children had stolen his tomato. His dark mood infected the house. He didn’t know which of us had done it. All of us were suspect. Safe behind Mom’s protection, all my sisters maintained their innocence. As of course, did I.

We moved out west in 1957, where summer nights are cool and dry, and not as friendly to tomatoes. I’ve grown tomatoes in the west for more than fifty years, but I’ve never duplicated the sensational taste or size of that stolen tomato of my childhood.

Dad planted a vegetable garden every year. He even bought the vacant lot next door and turned that into food production as well. As he aged he began to complain about the hard work. Each year he swore he would never plant a garden again and yet, by summer his garden would always be in full production. Throughout the growing season he distributed baskets of onions, squash, beans and tomatoes to all of his children.

As I matured and put down roots thousands of miles away to found my own family, my father and I remained close. We conversed for hours about orchids, birch trees, and tomatoes. We debated the merits of fertilizers, hand tools, and special cultivars. I convinced him to try native wildflowers in the flower beds, he convinced me to grow his favorite open-pollinated pimiento. The garden has been a conduit for our love for almost sixty years.

Over all that time I never told Dad that I was the one who ate that tomato. He would laugh about it now, if it were possible for him to understand me. But it’s too late.

After ninety six years he’s gone away, leaving his body behind. The doctors call it senile dementia, not Alzheimer’s, but the result is the same. He has no memory of any of his children, of his wife of seventy-one years, or of anything to do with gardening. I am a stranger to him now. Just a nice guy who brought him the last ripe tomato of the season.